I’ve recently stumbled on the following error in SCSM 2012 R2: 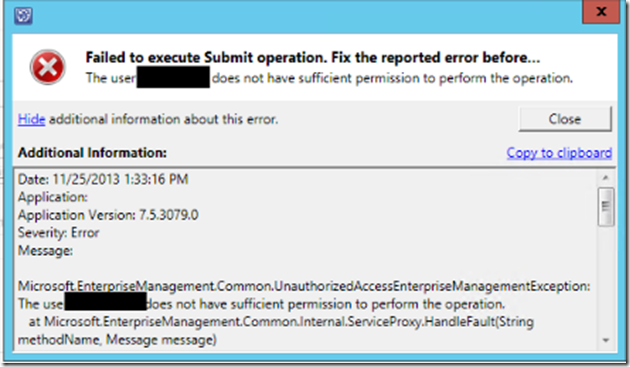 A user part of Incident Resolvers group was not able to save particular custom filed in work item in SCSM console.

What I’ve found here and here that is some kind of bug since 2010 version of SCSM. There is way to fix it but keep in mind that the steps ARE NOT SUPPORTED BY MICROSOFT. The described steps are not new but I wanted to summarize them.

You have some custom fields added on work items (incident, change and etc.) forms in Service Manager. Users that are part of a group with less privileges like Incident Resolvers cannot modify these fields in the form and receive the error above.

There is a hotfix for 2010 version but that will not work for 2012. The hotfix contains SQL script that adds some stored procedures in your Service Manager DB. Luckily you do not even have to download the hotfix to find that SQL script as it is extracted by Roman Stadlmair and available here. And here arte he steps you can follow:

After executing this command Incident Resolvers were able to add information for this field in incident forms. Problem solved.

Note: The steps are not supported by Microsoft and always contact Microsoft support if possible. Also first test in development environment before executing them in production.

Stanislav Zhelyazkov has been working in IT since 2007. Stanislav has started his IT career as a Help Desk Specialist in 2007 while studying Informatics in the University of Ruse. He also worked in HP Enterprise Services (now known as DXC), maintaining large corporate IT infrastructures for clients in Holland, Switzerland and Germany and was involved in a Private Cloud project based on MS Hyper-V and System Center. He was also in the role of Principal Consultant in Lumagate developing and consulting companies on Azure, OMS, management and Private clouds. Currently he is Cloud Infrastructure Engineer at Sentia Denmark. Stanislav is active community member at MSDN forums providing answers on Azure. His blogposts can be found at www.cloudadministrator.net or www.systemcentercentral.com. View all posts by Stanislav Zhelyazkov

This site uses Akismet to reduce spam. Learn how your comment data is processed.